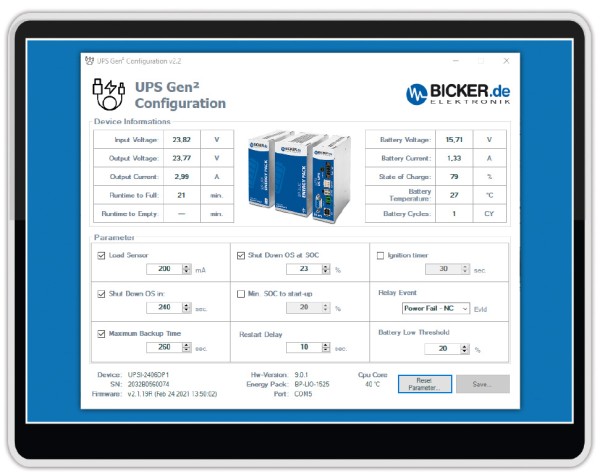 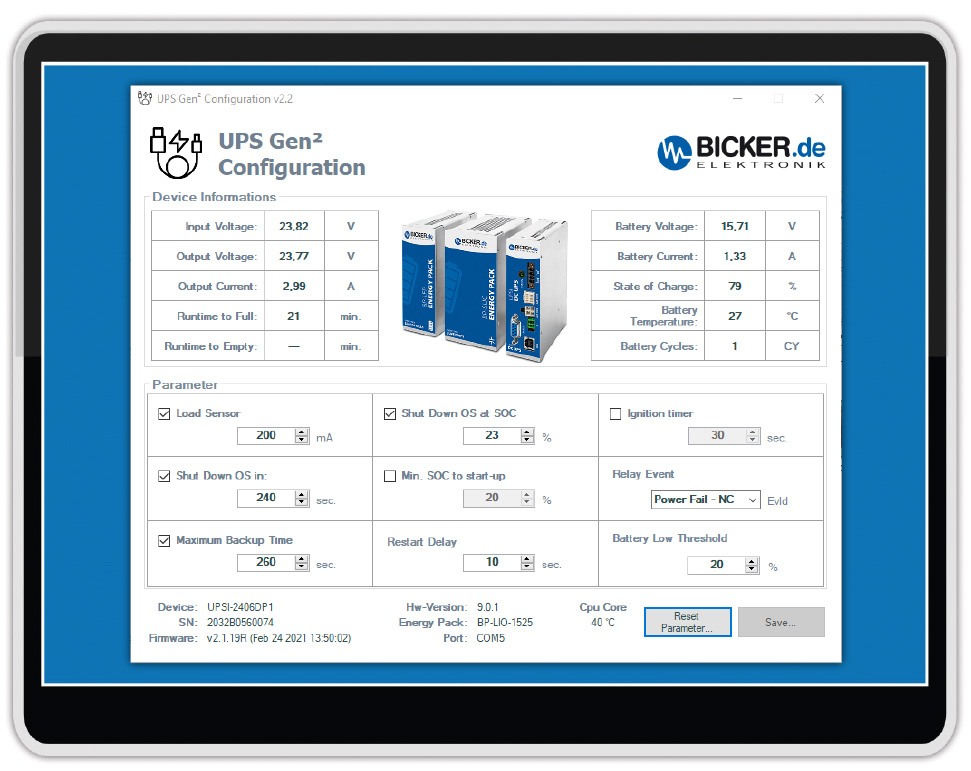 The free 'UPS Gen2 Configuration' software is available for download. The software is used for setting and parameterizing UPSI DC UPS systems and real-time monitoring. The UPS and battery status displays include all relevant voltages, currents as well as battery temperature, state of charge (SOC), run times and cycles. The parameters that can be preset include the load sensor (mA), shutdown delay, maximum backup time, minimum charge capacity before system start, timer function and restart delay. Autonomous operation is then possible with the set values. 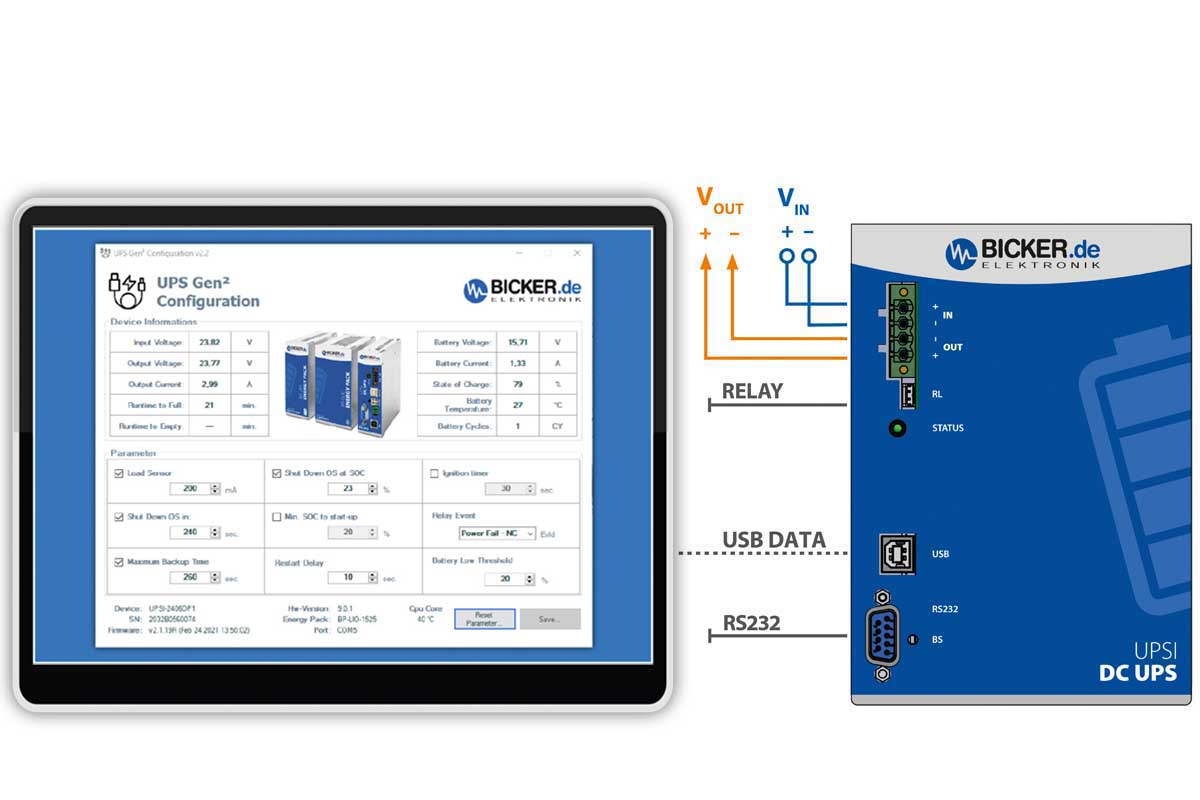 Timer function for controlled system shutdown according to time specification

The new parameter "Shut Down OS in" can also be used to set the time before the computer system is shut down and switched off in the event of a power failure. This means that, in addition to your own operating system settings via the state of charge of the energy storage ("Shut Down OS at SOC"), you can now also define a specific time specification for controlled shutdown in UPS backup mode.

In the 'UPSGen2 Configuration' software, the minimum output current to the DC load in UPS battery operation can be set and monitored via the load sensor. If the load at the output of the UPSI falls below this limit value, the integrated LiFePO4 battery is automatically disconnected from the charging and control unit after 10 seconds, so that no unnecessary and creeping discharge can take place. In addition, the UPSI can also be switched off in a defined manner using the minimum load detection.

The functionality and behavior of the 2-pin relay connection in the event of a power failure can be defined using the 'UPSGen2 Configuration' software: 'Normally Open', 'Normally Closed' or 'Shutdown Pulse'. When the relay is closed, the resistance between the two pins is ⁓ 0 ohms, otherwise the contacts are 'open load'.

In the event of a 'PowerFail', the UPSI signals the failure of the supply voltage via the integrated interface, so that a controlled shutdown of the computer system is initiated and valuable data is saved. After the supply voltage returns, the integrated reboot function automatically restarts the supplied industrial PC without the need for complex on-site intervention, e.g. in the case of completely self-sufficient computer systems in inaccessible locations.

The Software can be downloaded here

The User Manual can be downloaded here

Functional cookies are absolutely necessary for the functionality of the web shop. These cookies assign a unique random ID to your browser to ensure your unhindered shopping experience across multiple page views.

Tracking cookies help the shop operator to collect and evaluate information about the behavior of users on their website.

affiliate program:
Cookie: partner, duration: 30 days, reason: The partner cookie is used to evaluate direct links from other platforms in terms of sales. Sales and times of the order are recorded.
origin registration:
Cookie: nb_asyncconv_gcid_1, Duration: 14 days, Reason: The cookie is used to record whether a customer has reached the shop via paid advertising campaigns.
consent request
Note on the use of cookies and processing: We use cookies on our website. The purposes of the necessary cookies include providing the shopping cart, displaying VAT or selecting payment methods. Cookies that are not required are used for analysis and evaluation to improve our offers in the web shop and the economic operation of our online offer. You can accept the required cookies by clicking on the "Only required cookies" button or agree to the use of all cookies by clicking on the "Accept all cookies" button. You can recall, withdraw and change your consent and settings at any time via the "Cookie settings" link in the footer of the page or on the page. More information
Imprint Privacy Conditions
Show prices with or without vat?
To show you relevant prices please select if your purchase will be private or commercial.
Please select:
Comercial (net)
Show prices without vat
Private (gross)
Show prices including vat