This website uses cookies, which are necessary for the technical operation of the website and which are always set. Other cookies, which increase the comfort when using this website, are used for direct advertising or to simplify interaction with other websites and social networks, are only set with your consent.

Select here which services should be active.

Configure Save Accept all
Categories
Information 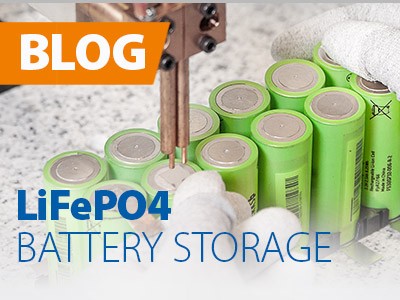 Our 10-year battery packs for UPS systems:
That's why we rely on LiFePO4 high-performance cells 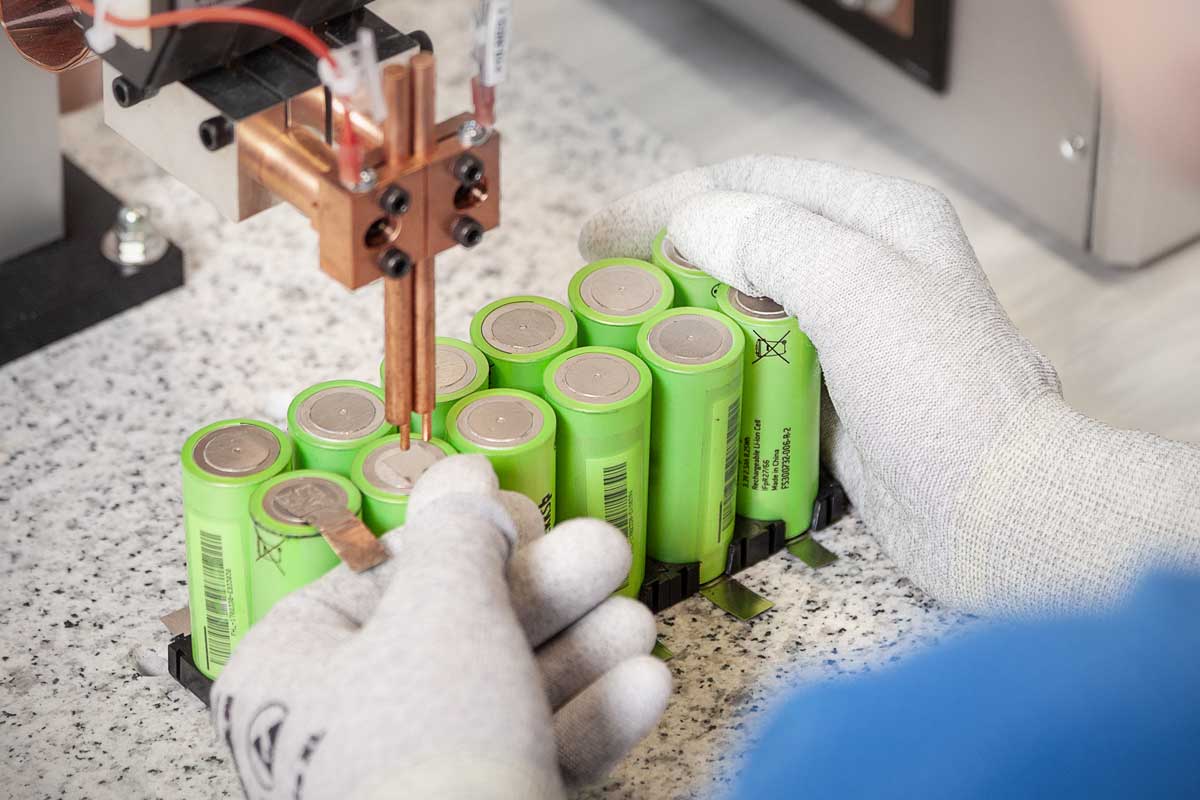 The fail-safe DC power supply of embedded IPCs, controllers, motor drives, sensors, measurement, control and safety technology prevents costly system downtimes or data loss. For demanding DC UPS solutions in industrial, medical and process technology, we rely on LiFePO4 high-performance cells in the production of our 10-year battery packs. Why does the LiFePO4 technology in particular meet the highest standards of quality, safety and reliability? What are the benefits of LiFePO4 technology specifically for UPS batteries? 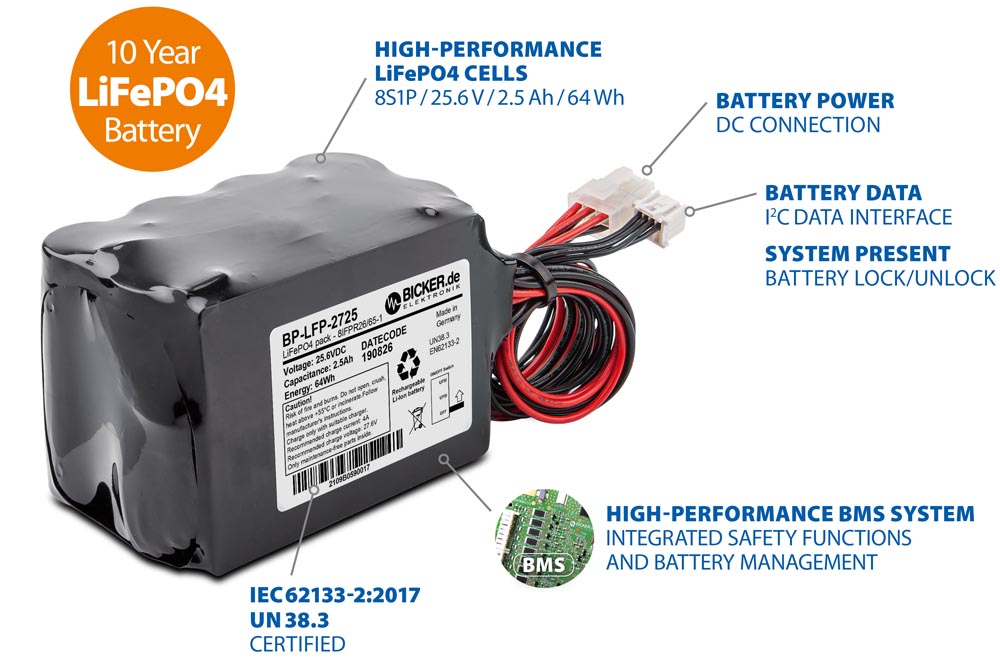 Lithium-ion technology at a glance

As the successor to the conventional lead-sulfuric acid battery chemistry, modern lithium-ion batteries have become established not only in portable electrical devices and in electromobility. Although these are more expensive to buy than classic lead-gel batteries, particularly high energy densities can be achieved with lithium-ion technology with space and weight savings of up to 75%. Lithium is the lightest metal in the periodic table and at the same time has ideal electrochemical properties for the realization of high specific energy densities (Wh/kg). The number of charging cycles, the achievable depth of discharge DoD (Depth of Discharge) and the service life are also many times greater than with lead-gel batteries.

With each full cycle (charge/discharge), the lithium-ion cell is subjected to chemical, thermal and mechanical stresses (expansion), which cause cell aging. In particular, charging with high currents (rapid charging) and at low temperatures can lead to lithium plating on the anode. Here, the lithium ions are not stored in the graphite layer structure of the anode as intended, but are metallically deposited on the surface of the graphite anode and thus lead to significant performance losses or even short circuits within the cell. High end-of-charge voltages or even overcharging also lead to strong heat generation, expansion and stress on the lithium-ion cell.

In addition to numerous other material combinations, three cathode materials have become established for energy storage:

In addition to different nominal voltages, the different cathode materials of corresponding lithium-ion battery cells require a large number of other properties.

When selecting a lithium-ion energy storage device, it is advisable to take a closer look at the cathode material used, because lithium-ion technology repeatedly makes negative headlines with pictures of burning electric cars or melting mobile phones, especially from a safety point of view. The high energy density that can be achieved due to the electrochemical advantages of lithium also involves an increased risk of fire, which is why lithium-ion batteries are subject to special transport and air freight regulations.

Particularly in cells with chemically and thermally unstable cathode material such as lithium cobalt oxide (LCO) or lithium nickel manganese cobalt oxide (NMC), excessive heat can be generated by overcharging, internal or external short circuit, mechanical damage, production-related contamination or severe external exposure to heat and can trigger an exothermic chemical reaction within the cell. The heat energy released increases the reaction speed of the cell chemistry and causes the cell-internal temperature to rise further. This self-accelerating process cannot be stopped once a specific temperature limit is exceeded. This temperature limit depends on the cell chemistry used and is 150 °C for lithium cobalt oxide (LCO), for example. Thermal runaway occurs, which can ultimately lead to cell fire or explosion. Since the oxygen bound in the cathode material is released in such a case, such a fire is very difficult to extinguish.

Therefore, lithium-ion energy storage devices must be equipped with protective circuits against over-temperature (OTP), over-current (OCP), over-voltage (OVP) and short-circuit (SCP), as well as preventing direct exposure to heat and mechanical damage to the cells.

With lithium iron phosphate (LiFePO4), a much more stable chemical compound with increased safety is available for the cathode material. In the event of overcharging, the thermal energy generated is significantly lower and even in the "nail test" (internal short-circuit of the cell due to the penetration of a metallic body), thermal runaway of the cell is almost impossible, since lithium-iron-phosphate contains little or no oxygen in the event of a fault and the specific temperature for a thermal runaway of 270 °C is significantly higher than with other cathode materials. Bicker Elektronik therefore deliberately relies on the particularly safe lithium iron phosphate chemistry for all high-performance battery packs, which makes thermal runaway almost impossible.

For our BP-LFP battery packs, only branded high-performance cells from LithiumWerks are used, which clearly stand out from other manufacturers on the market due to their long service life and high cycle stability. The automated production of the high-performance cells ensures consistently high quality. Combined with our specially developed battery management system (BMS), we can guarantee the highest safety and reliability of the product.

Due to the slightly lower cell voltage of 3.2 V, the energy density of LiFePO4 cells is not quite as high as that of NMC/LCO Li-Ion cells, but this supposed disadvantage is compensated for after a short period of use by a roughly tenfold higher cycle stability ( >3000 charging and discharging cycles at 80% of the initial capacity) more than compensated. NMC/LCO cells age cyclically much more quickly and already have only 80% of their initial capacity after around 300 cycles. To this end, the somewhat higher initial costs associated with the use of lithium iron phosphate are put into perspective. Every LiFePO4 high-performance cell is tested and optimally calibrated as part of the battery pack production at Bicker Elektronik. Charge and discharge profiles optimized for the energy storage device with adjusted end-of-charge voltages and depths of discharge DoD (Depth of Discharge) and the use of a battery management system (BMS) protect the materials of the lithium-ion cell and ensure a long service life. With regard to the storage of lithium-ion batteries, they should be recharged regularly, despite their extremely low self-discharge, in order to avoid deep discharge and the associated destabilization of the cell chemistry.

In contrast to the supposedly cheap lead-acid/gel/AGM accumulators, high-quality lithium iron phosphate cells have a service life and cycle stability that is approx. 15-20 times longer. When calculating the TCO (Total Cost of Ownership) over the entire period of use of at least 10 years, there is a clear cost advantage compared to lead-acid batteries, especially since there is no effort for maintenance and battery replacement with LiFePO4 during this period. 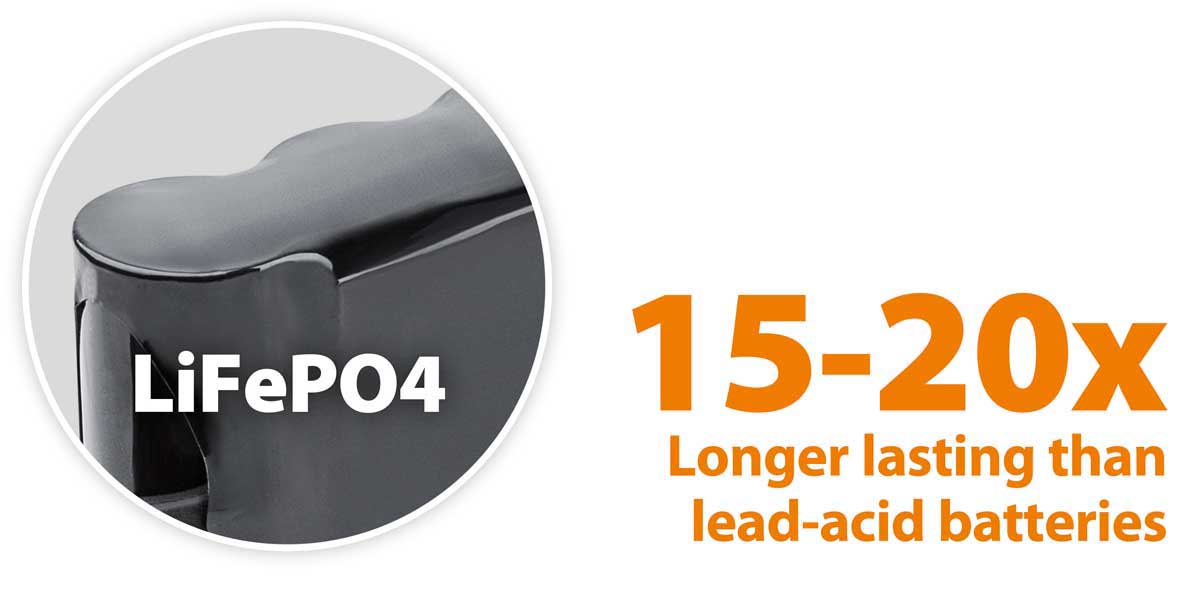 Due to the high energy density, our DC emergency power supplies with LiFePO4 energy storage also bridge longer downtimes – depending on the load supplied. In addition, with the LiFePO4 battery pack, 100% of the full nominal capacity can be used permanently. Lead-acid batteries have significant limitations in terms of depth of discharge and number of cycles. In addition, the electrochemical structure of LiFePO4 high-performance cells allows high charging and discharging currents and an increased pulse load capacity in direct comparison to other lithium-ion battery systems.

Use at sub-zero temperatures

Compared to other battery technologies, LiFePO4 cells are much less sensitive to heat and can even be used at sub-zero temperatures. The temperature range of commercially available LiFePO4 cells extends from -30 to +65 °C. The working temperature range for the LiFePO4 battery packs BP-LFP / BP-LFP-D from Bicker Elektronik was deliberately specified at -20 to +55 °C: On the one hand, it is no longer possible to charge the cells in a practicable manner at extreme minus temperatures. On the other hand, the cells within a battery pack in normal operation at an ambient temperature of +55 °C already reach a cell temperature of +65 °C due to self-heating (and would therefore be overloaded at higher ambient temperatures). An important detail that should be taken into account when comparing different cell and battery packs in terms of temperature information. 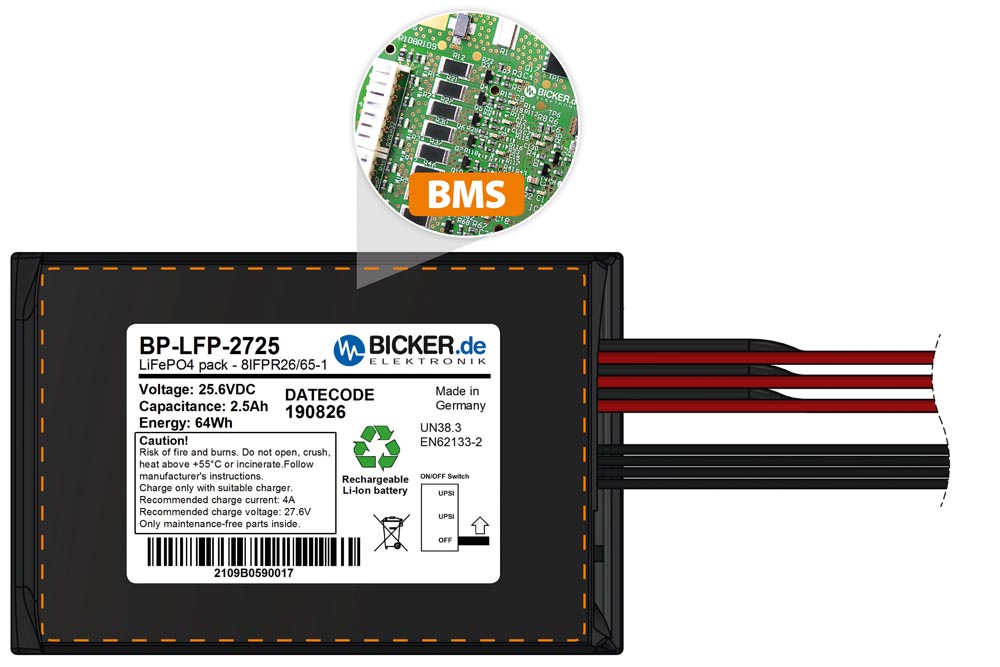 A balancing IC constantly measures and controls the cell voltages and current flow and can react to critical changes within microseconds. The LiFePO4 energy storage also has electronic overcurrent and short-circuit protection, so that the battery pack is not damaged in the event of an assembly error. The same applies to overvoltage and undervoltage in the cells. In addition to the MOSFET safety circuit on the battery management system, a special thermal fuse protects the battery pack from the risk of overcharging as a second safety level. Here you can see the schematic structure of a BMS using the example of the intrinsically safe LiFePO4 battery pack BP-LFP-2725(D): 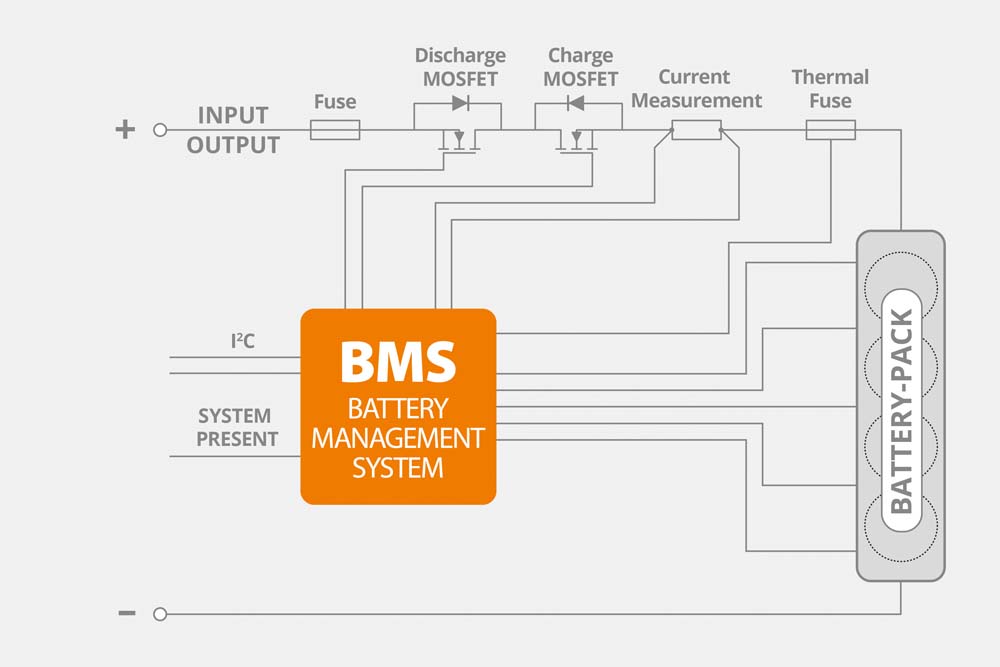 Within an energy storage device, several individual cells are connected in series to increase the nominal voltage. Due to manufacturing tolerances and different degrees of aging of the cells, they differ in capacity and internal resistance. In this case, the performance and total capacity of the lithium-ion battery pack is based on the "weakest" cell in the group, as this is the first to reach the voltage limit value for the charge limitation during the charging process and thus prevents the remaining cells from being fully charged. This has a negative impact on the service life, number of cycles and capacity of the energy storage device and can ultimately even damage the battery pack.

Cell balancing (active or passive) compensates for these differences between the individual compound battery cells by means of appropriate wiring and ensures balanced and even charging of all cells, so that the full capacity of the lithium-ion battery pack remains usable and no critical extreme situations arise in individual cells. The service life of the battery pack can be significantly extended through the superordinate cell balancing.

Last but not least, LiFePO4 battery technology makes an active contribution to protecting people and the environment by not using toxic heavy metals such as nickel, cadmium or the rare raw material cobalt. The lithium iron phosphate cells are also impressive when it comes to recycling. In contrast to other battery technologies, almost 100% of all metals used can be recycled. 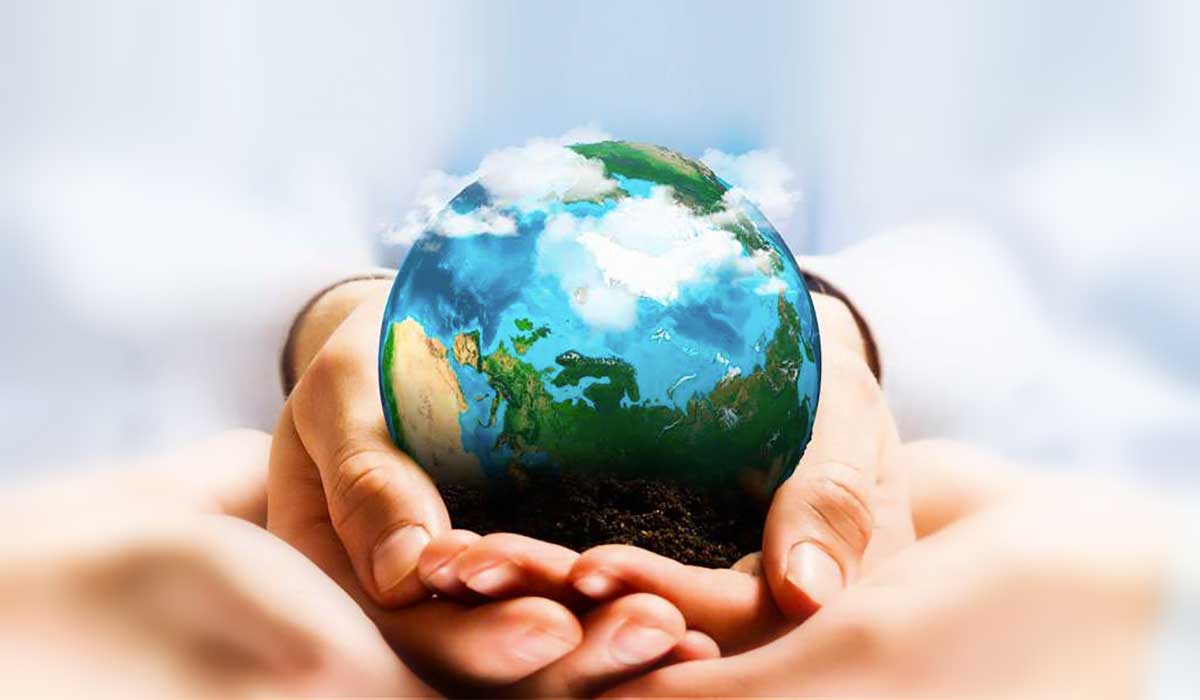 Due to the excellent material properties and the particularly long service life of at least 10 years, LiFePO4 energy storage contributes to active resource conservation, reduced disposal costs and protection of the environment. LiFePO4 is also convincing as a battery technology in the long term with regard to the total cost ratio (TCO).

Strict standards for quality and safety apply in our battery pack production at the headquarters in Donauwoerth/Germany. With the utmost care and professionalism, high-quality and sustainable products are created for many years of 24/7 continuous use in demanding applications under sometimes extreme environmental conditions.

All of these advantages predestine lithium-iron-phosphate battery cells as safe and particularly durable energy storage for reliable DC UPS systems. 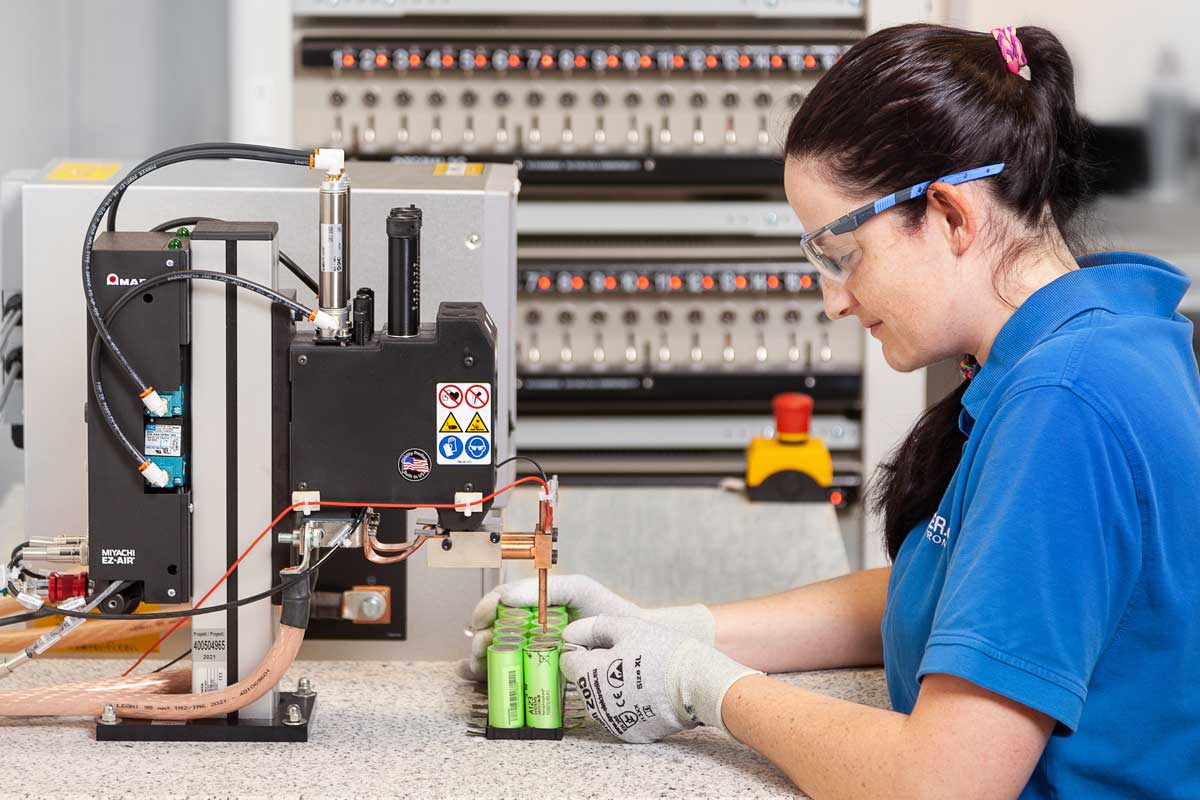